Grafting - How do I bond two plants together?

Grafting plants, information, tips and suggestions on what works best.

Grafting is a method of plant propagation widely used in horticulture (gardening), where the tissues of one plant are encouraged to fuse with those of another. It is most commonly used for the propagation of trees and shrubs grown commercially. (Grafting is limited to dicots and gymnosperms. Monocots lack the vascular cambium required.) 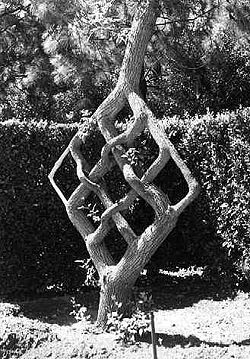 In stem grafting, a common grafting method, a shoot of a selected, desired plant cultivar is grafted onto the stock of another type. In another common form called budding, a dormant side bud is grafted on the stem of another stock plant, and when it has fused successfully, it is encouraged to grow by cutting out the stem above the new bud.

For successful grafting to take place, the vascular cambium tissues of the stock and scion plants must be placed in contact with each other. Both tissues must be kept alive until the graft has taken, usually a period of a few weeks. Successful grafting only requires that a vascular connection takes place between the two tissues. A physical weak point often still occurs at the graft, because the structural tissue of the two distinct plants, such as wood may not fuse. 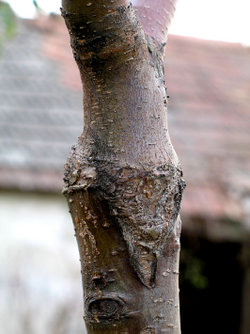 * Dwarfing: To induce dwarfing or cold tolerance or other characteristics to the scion. Most apple trees in modern orchards are grafted dwarf or semi-dwarf trees planted at high density. They provide more fruit per unit of land, higher quality fruit, and reduce the danger of accidents by harvest crews working on ladders.

* Ease of propagation: Because the scion is difficult to propagate vegetatively by other means, such as by cuttings. In this case, cuttings of an easily rooted plant are used to provide a rootstock. In some cases, the scion may be easily propagated, but grafting may still be used because it is commercially the most cost-effective way of raising a particular type of plant.

* Hybrid breeding: To speed maturity of hybrids in fruit tree breeding programs. Hybrid seedlings may take ten or more years to flower and fruit on their own roots. Grafting can reduce the time to flowering and shorten the breeding program.

* Hardiness: Because the scion has weak roots or the roots of the stock plants have roots tolerant of difficult conditions. e.g. many showy Western Australian plants are sensitive to dieback on heavy soils, common in urban gardens, and are grafted onto hardier eastern Australian relatives. Grevilleas and eucalypts are examples.

* Sturdiness In order to provide a strong, tall trunk for certain ornamental shrubs and trees. In these cases, a graft is made at a desired height on a stock plant with a strong stem. This is used to raise 'standard' roses, which are rose bushes on a high stem, and it is also used for some ornamental trees, such as certain weeping cherries.

* Pollen source: To provide pollenizers. For example, in tightly planted or badly planned apple orchards of a single variety, limbs of crab apple may be grafted at regularly spaced intervals onto trees down rows, say every fourth tree. This takes care of pollen needs at blossom time, yet does not confuse pickers who might otherwise mix varieties while harvesting, as the mature crab apples are so distinct from other apple varieties.

* Repair: To repair damage to the trunk of a tree which would prohibit nutrient flow, such as the stripping of the bark by rodents which completely girdles the trunk. In this case a bridge graft may be used to connect the tissues receiving flow from the roots to the tissues above the damage which have been severed from the flow. Where a watersprout, sucker or sapling of the same species is growing nearby, any of these can be grafted to the area above the damage by a method called inarch grafting. These alternatives to scions must be of the correct length to span the gap of the wound.

* Changing cultivars: To change the cultivar in a fruit orchard to a more profitable cultivar, called topworking. It may be faster to graft a new cultivar onto existing limbs of established trees than to replant an entire orchard.

* Maintain Consistency: Apples are notorious for their genetic variability, even differing in multiple characteristics, such as, size, color, and flavor, of fruits located on the same tree. In the commercial farming industry, consistency is maintained by grafting a scion with desired fruit traits onto a hardy stock.

The easiest and most common form of grafting is cleft grafting. The stock is simply split and the scion is inserted. It is best if the stock is 2-7 cm in diameter and has 3-5 buds, and the cleft is around 7cm deep. The scion is cut in a wedge (geometry) shape and inserted into the tree with the cambium. The bare stock is covered with grafting compound, otherwise the cambium layer quickly dries and the graft fails.

Stub grafting is a technique that requires less stock than cleft grafting, and retains the shape of a tree. Also scions are generally of 6-8 buds in this process.

An incision is made into the branch one centimeter above, then the scion is wedged and forced into the branch. The scion should be at an angle of at most 35° to the parent tree so that the crotch remains strong. The graft is covered with grafting compound.

Awl grafting takes the least resources and the least time, but the most skill. There is a danger of accidentally driving the tool too far into the stock, lessening the scion's chance of survival. Awl grafting can be done by using a screwdriver to make a slit or T-shaped incision in the bark just so far as the cambium layer. Then the shield or wedged-shaped scion is inserted into the incision. Awl grafting is commonly used to graft buds.

Veneer grafting, or inlay grafting, is a method used for stocks larger than three centimeters in diameter. The scion is recommended to be about as thick as a pencil. Clefts are made of the same size as the scion on the side of the branch, not on top. The scion end is shaped as a wedge, inserted, and wrapped with tape to the scaffolding branches to give it more strength.

"Renewing fusion" is a grafting method in which a small branch (at least a centimeter wide) from one plant to a main branch of another, by carefully shaving a proper amount of bark from the large branch and inserting the scion into a cut hole. The graft is taped with a thin strip of duct tape in diagonal lashings, to hold it up and to prevent insects from entering the hole.

The tree roots of the same species will sometimes naturally graft where they make physical contact with each other. A group of trees can share water and mineral nutrients via root grafts, which may be advantageous to weaker trees. A problem with root grafts is that they allow transmission of certain pathogens, such as Dutch elm disease. Natural grafting also sometimes occurs where two stems on the same tree, shrub or vine make contact with each other. This is most common in plants such as strawberries and potatoes.[top]

Grafting has been important in flowering research. Leaves or shoots from plants induced to flower can be grafted onto uninduced plants and transmit a floral stimulus that induces them to flower.

The transmission of plant viruses has been studied using grafting. Virus indexing involves grafting a symptom-less plant that is suspected of carrying a virus onto an indicator plant that is very susceptible to the virus.

Grafting is often done for non-woody plants such as a tomato, cucumber, eggplant and watermelon. The main advantage of grafting is for disease-resistant rootstocks. In Japan there is an automated process using grafting robots.[top]