Greenhouses - Why Use a Greenhouse

How to maximize your garden using a greenhouse 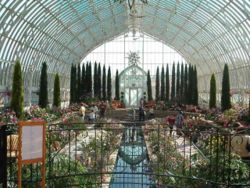 A greenhouse (also called a glasshouse or hothouse) is a building where plants are cultivated A greenhouse is a structure with a glass or plastic roof and frequently glass or plastic walls; it heats up because incoming solar radiation from the sun warms plants, soil, and other things inside the building. Air warmed by the heat from hot interior surfaces is retained in the building by the roof and wall. These structures range in size from small sheds to very large buildings.

The glass used for a greenhouse works as a selective transmission medium for different spectral frequencies, and its effect is to trap energy within the greenhouse, which heats both the plants and the ground inside it. This warms the air near the ground, and this air is prevented from rising and flowing away. This can be demonstrated by opening a small window near the roof of a greenhouse: the temperature drops considerably. This principle is the basis of the autovent automatic cooling system. Greenhouses thus work by trapping electromagnetic radiation and preventing convection. A miniature greenhouse is known as a cold frame.

Greenhouses are often used for growing flowers, vegetables, fruits, and tobacco plants. Bumblebees are the pollinators of choice for most greenhouse pollination, although other types of bees have been used, as well as artificial pollination.This helps the plants to produce more plants for future plantations.

Besides tobacco, many vegetables and flowers are grown in greenhouses in late winter and early spring, and then transplanted outside as the weather warms. Started plants are usually available for gardeners in farmers' markets at transplanting time.

The closed environment of a greenhouse has its own unique requirements, compared with outdoor production. Pests and diseases, and extremes of heat and humidity, have to be controlled, and irrigation is necessary to provide water. Significant inputs of heat and light may be required, particularly with winter production of warm-weather vegetables. Special greenhouse varieties of certain crops, like tomatoes, are generally used for commercial production. 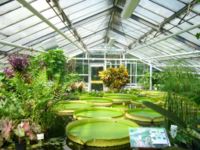 Greenhouses are increasingly important in the food supply of high latitude countries. The largest greenhouse complex in the world is in Willcox, Arizona, USA where 262 acres of tomatoes and cucumbers are entirely grown under glass.

Greenhouses protect crops from too much heat or cold, shield plants from dust storms and blizzards, and help to keep out pests. Light and temperature control allows greenhouses to turn inarable land into arable land. Greenhouses can feed starving nations where crops can't survive in the harsh deserts and Arctic wastes. Hydroponics can be used in greenhouses as well to make the most use of the interior space.

Biologist John Todd invented a greenhouse that turns sewage into water, through the natural processes of bacteria, plants, and animals.

The idea of growing plants in environmentally controlled areas has existed since Roman times. The Roman emperor Tiberius ate a cucumber-like vegetable daily. The Roman gardeners used artificial methods (similar to the greenhouse system) of growing to have it available for his table every day of the year. Cucumbers were planted in wheeled carts which were put in the sun daily, then taken inside to keep them warm at night. The cucumbers were stored under frames or in cucumber houses glazed with either oiled cloth known as "specularia" or with sheets of mica, according to the description by Pliny the Elder.

The first modern greenhouses were built in Italy in the thirteenth century[4] to house the exotic plants that explorers brought back from the tropics. They were originally called giardini botanici (botanical gardens). The concept of greenhouses soon spread to the Netherlands and then England, along with the plants. Some of these early attempts required enormous amounts of work to close up at night or to winterize. There were serious problems with providing adequate and balanced heat in these early greenhouses. 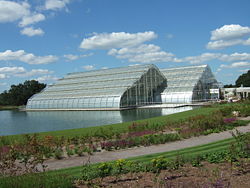 Originally on the estates of the rich, with the growth of the science of botany greenhouses spread to the universities. The French called their first greenhouses orangeries, since they were used to protect orange trees from freezing. As pineapples became popular pineries, or pineapple pits, were built. Experimentation with the design of greenhouses continued during the Seventeenth Century in Europe as technology produced better glass and construction techniques improved. The greenhouse at the Palace of Versailles was an example of their size and elaborateness; it was more than 500 feet long, 42 feet wide, and 45 feet high.

In the nineteenth Century the largest greenhouses were built. The conservatory at Kew Gardens in England is a prime example of the Victorian greenhouse. Although intended for both horticultural and non-horticultural exhibition these included London's Crystal Palace, the New York Crystal Palace and Munich’s Glaspalast. Joseph Paxton, who had experimented with glass and iron in the creation of large greenhouses as the head gardener at Chatsworth, in Derbyshire, working for the Duke of Devonshire, designed and built the first, London's Crystal Palace. A major architectural achievement in monumental greenhouse building were the Royal Greenhouses of Laeken (1874-1895) for King Leopold II of Belgium.

In Japan, the first greenhouse was built in 1880 by Samuel Cocking, a British merchant who exported herbs.

In the Twentieth Century the geodesic dome was added to the many types of greenhouses.